All photos by Leon Louw 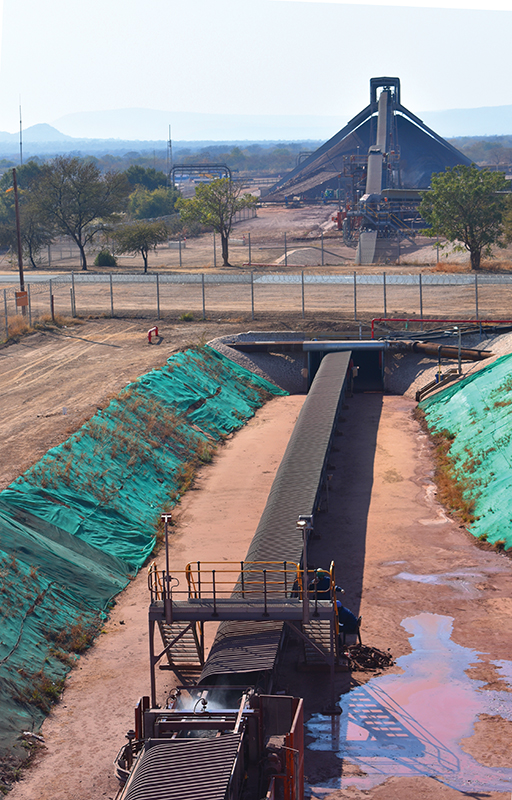 A 300m long belt conveys underneath the tarred road to the processing plant, which is located to the east of the mining operation.

Construction of the Nokeng Fluorspar Mine began on 9 June 2017. The operation comes online as international markets for its two products – acid grade fluorspar and metallurgical grade fluorspar – have come off recent highs but remain buoyant in a continuing squeeze between supply and demand.

China, the world’s largest fluorspar producer, has cut production in response to tighter environmental regulation and as a result has moved from being a net exporter of fluorspar to a net importer.

SepFluor enters the fluorspar production arena as one of only three significant production newcomers over the past 10 years, the low pricing experienced between 2011 and 2016 having closed several high-cost operations internationally.

The mine has a 12 million tonne (Mt) SAMREC-compliant reserve and an initial estimated life of mine of 19 years. It will initially exploit two haematite-fluorspar orebodies – Outwash Fan and Plattekop – with an option to later include Wiltin, a third and as-yet partially explored orebody.

Much of the Nokeng’s first year of production has already been sold, mostly into the international, US and European markets, with continuing strong demand from these markets and good prospects for additional sales into China and India.

According to Rob Wagner, SepFluor CEO, construction at the processing plant is now complete and when Mining Mirror visited the mine, it was about to start shipping its first fluorspar. Contractors DRA and DRA affiliate Minopex were still on-site when Wagner and Johan Brits, project director at SepFluor, took a group of investors and media through the complex yet compact plant.

A joint venture between Group Five and DRA constructed the plant, and they did it on an engineering, procurement and construction (EPC) basis; in other words, they were responsible for the design, supply, construction, and commissioning.

Brits explains that the processing cycle at Nokeng starts with primary crushing (a Sandvik jaw-crusher), followed by secondary crushing (a Sandvik cone-crusher). A Weir manufactured High Pressure Grinding Roll (HPGR) is used in the third step, which reduces the ore to minus 6mm. The material is fed through the primary crusher on the western side of the D567 bitumen road that dissects the mining area from the processing plant. Once through the crusher, a 300m long belt conveys the crushed rock in a tunnel underneath the road and delivers it to the secondary crusher, which is located east of the road. After the three crushing stages, the material is fed into a primary mill, which reduces the size further to 80% passing150 microns. The separation process involves an oxide float rather than a sulphite float, which is normally used in conventional flotation in the gold, platinum, and base metal industries. 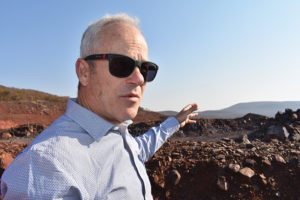 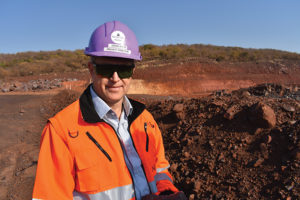 The flotation process at Nokeng uses specific chemicals and reagents, and according to Brits it comprises several additional flotation steps to upgrade the ore in order to achieve the desired product.

“The first stage is known as rougher flotation; after that, the ore goes through a further six stages of cleaner flotation. The cleaner tailings are reground and re-floated. This product joins the mainstream acidspar circuit. The re-float tails and first cleaner tails are processed and used to produce Metspar, a lower-grade fluorspar product. The acidspar at Nokeng has a grade of 97.2% calcium fluorite. This is filtered to contain less than 10% moisture, and the premium product, which is our acid spar, is then transported to the port and sold to international clients,” says Brits.

Metspar contains more than 80% calcium fluorite, and is used in the pyrometallurgical metallurgical industry, mostly for smelting, as it reduces the temperature at which smelting takes place and therefore reduces energy consumption.

The unique flotation process at Nokeng includes a conditioning step that requires the temperature of the mixture to be increased to more than 60 degrees Celsius. Therefore, boilers had to be installed. The boilers were built and manufactured in Zimbabwe. The increased temperature significantly improves the separation of the fluorspar from the gangue (unwanted minerals). In Nokeng’s case, the gangue is mainly iron oxide, which is hematite, and silica. “To increase the temperature, several methods can be used, but all involve energy input. Electricity springs to mind immediately, but electricity is only economical in small amounts. The most efficient and the most economical way to satisfy the heat requirements is with coal-fired boilers. To generate enough steam, we require low-pressure boilers,” says Brits.

The mine has installed four boilers. Each of the boilers produces about 10 tonnes per hour of steam. The plan is to have three boilers operating at any one time and then have a fourth boiler on standby. 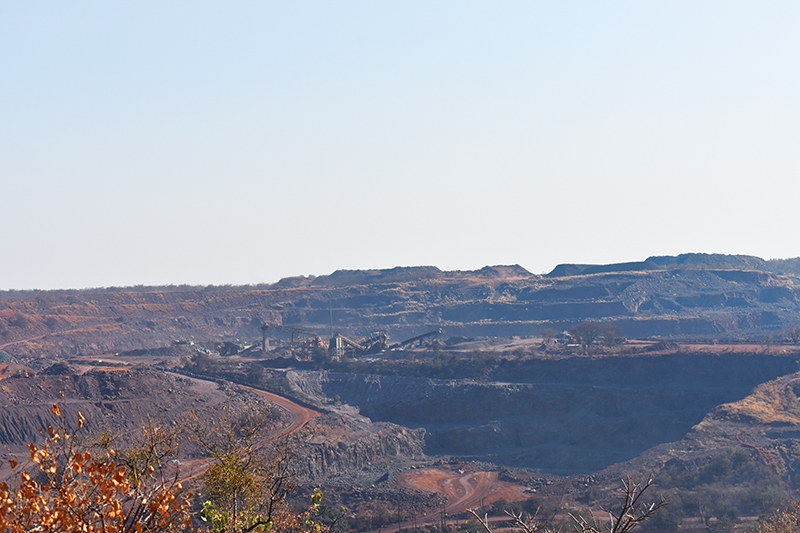 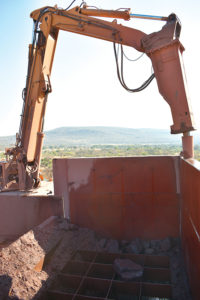 Nokeng is currently mining and crushing ore from the Plattekop deposit, west of the processing plant.

Wagner says that they have started mining both the Outwash Fan and Plattekop deposits. Most of the initial overburden unearthed from the Outwash Fan deposit was used in the construction of the tailings dam. Lower grade ore from the Outwash Fan was put through the plant first before the deposit at Plattekop was exposed, which, according to Wagner, produces a higher-grade ore. All mining currently takes place in the Plattekop pit.

Initially, in the first year, mining will focus mainly on the Plattekop orebody with smaller tonnage coming from the Outwash Fan orebody. In the second year, mining on the Outwash Fan deposit will start in earnest and for the next nine years the plant will receive a blended product from both pits. Thereafter for about seven years, the plant will be fed from a higher-grade shallower portion of the Outwash Fan deposit as the Plattekop deposit will be worked out. In the last three to four years, mining will be concentrated in the deeper portion of the Outwash Fan pit. There is a real prospect of extending the life of mine from Wiltin, the third ore body on Nokeng’s license area. Wiltin is only partially explored at this stage.

“We do not know too much about Wiltin, but it looks like a large orebody, and it offers potentially a very viable alternative,” says Wagner. The hills above the processing plant are rich in fluorspar and at Wiltin, it outcrops in a number of places very close to the surface. “We have done some geophysics, but we still don’t know the full extent of the ore body. However, it does appear to be an extension of the Plattekop ore body and has a similar sort of grade to Plattekop,” says Wagner.

The ore is drilled, blasted, loaded, and hauled from the pits to the mineral processing facility. Outwash Fan is about one kilometre from the plant, while Plattekop is just under three kilometres. The open pit mining is done by medium scale mining contractor Andru Mining, which uses two excavators in the pit and four 30 tonne ADTs to haul the material to the primary crusher.

Wagner says that the mine is not yet running at full capacity and that there are elements of the plant that are capable of handling a lot more feed. “We believe we can get the plant up to 220 000 to 250 000 tonnes per annum output within two to three years after startup, and then we still need to look at Wiltin as well,” he says. The company plans to continue exploration of the Wiltin deposit over the next two years. “We know that the deposit outcrop, which is between 15m to 20m thick on surface, is a very significant deposit, we just don’t know the extent, Wagner explains. Furthermore, Wagner adds that there could be other substantial deposits in the hills.

There are not many other operating fluorspar mines in South Africa, with Nokeng’s neighbour, Vergenoeg, being the most significant. Vergenoeg is jointly owned by Spanish fluorspar producer Minerales y Productos Derivados SA (Minersa) with an 85% share, and MEDU Capital (15%). The mine has a production capacity of 240 000 tonnes per annum (tpa).

The resources at the Plattekop and Outwash deposits at Nokeng are world-class in terms of grade, low deleterious elements, bulk type deposits as opposed to vein-type deposits and ease of mining. South Africa hosts about 17% of the world’s fluorspar reserves. Currently the global fluorspar market is about
6Mt a year. 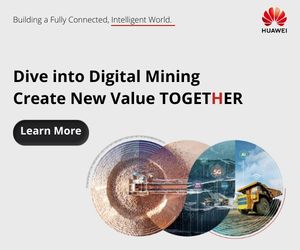 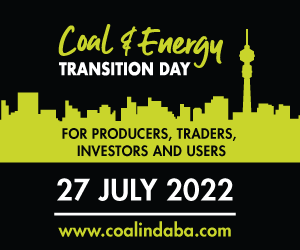 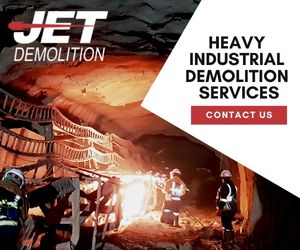