With ambition and the will to improve their production, Ground Breakers installed an all-in-one materials washing and water recycling CDE Combo, which has revolutionised their operation, writes Ntsako Khosa.

All images by Ntsako Khosa 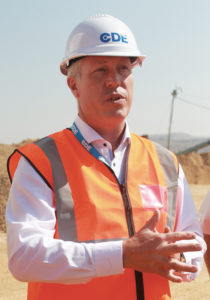 The aggregate quarry located in Lanseria is a little under five years old and produces over 12 000 tonnes of product a month. Looking at the family history, quarrying is second nature to owners Johan Meintjes and JC Janse van Vuuren. What might explain their success thus far, is having a forefather who is still in the industry.

Installed in March this year, the technology stems from CDE. The multinational firm designs, manufactures and commissions wet processing plants in the sand and aggregrates, mining, construction and demolition waste recycling, industrial sands and environmental sectors.

Patented as the CDE Combo, it is an all-in-one wet processing and water recycling system meant to support the Ground Breakers quarry by enhancing the quality of its materials and simultaneously lowering operating costs. It further ensures greater return on investment.

Prior to opting for the Combo, Ground Breakers experienced various challenges surrounding their bucket technology. “We had limited water sources and limited space to put up a proper wash plant. Any silt dams we dug were taking away valuable mining area,” says van Vuuren. Meintjes adds “The system we had previously offered one very sloppy wet product and it wasn’t consistent either. This was because of factors like the plant jamming, and so on.” 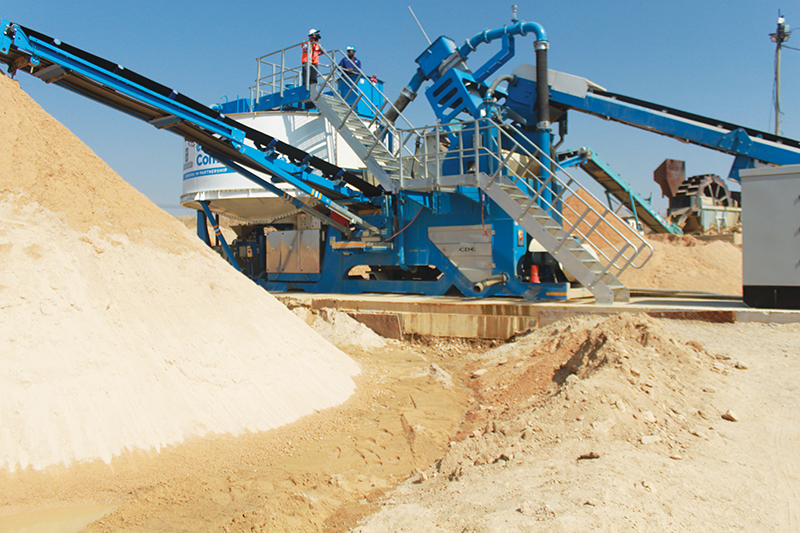 CDE maintains that the smaller the machinery’s footprint is, the more mining area you can preserve.

The bucket wheel came with its own limitations relating to product output. “Bucket wheels struggle to process sufficient volumes of water to achieve the desired cut points, fines are not efficiently removed and between 100 – 300 micron fractions are lost to ponds or to the water treatment phase,” says Wayne Warren, CDE business development manager for sub-Saharan Africa.

After rigorous testing by CDE, it was determined that the CDE Combo would be the best fit. It is tailor made to solve the quarry’s challenges. It has a capacity range of 50 to 500 tonnes, matched with a unique modular design to combine feeding, grading, washing, water recycling and stockpiling onto one compact chassis. This also makes the Combo environmentally friendly.

For the Ground Breakers quarry, the Combo transforms 80 tonnes per hour of raw feed into washed 0-6mm river sand and 0-1.5mm plaster sand. Running for less than a year and producing more than double the quantity, the technology has revolutionised the quarry.

According to CDE, the Combo helps to retain every valuable grain of sand available in the system and reduce the size of the settling ponds and maintenance time. Warren explains that material handling and washing happens in one place. “Instead of water going off to a different part of the site to be washed and reused at a later stage, in this instance, it is reused immediately.” Called the AquaCycle, the thickener – which is incorporated on the chassis – recycles the process water for immediate recirculation in the system. 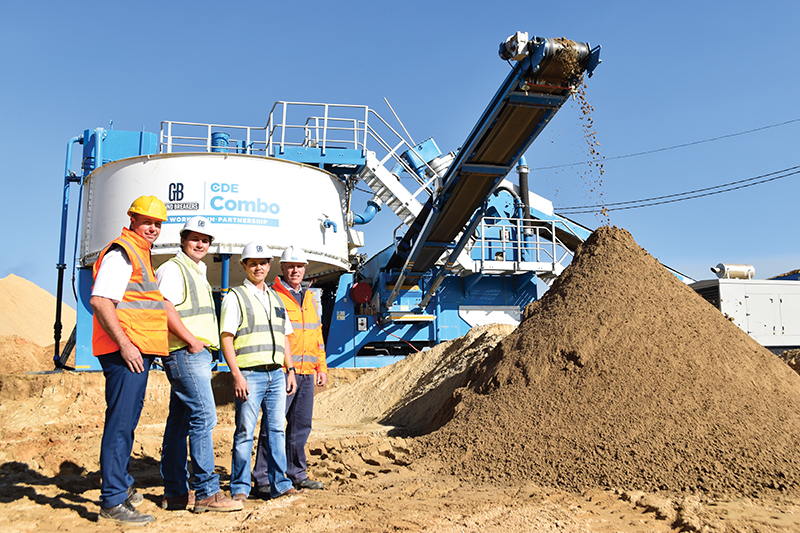 Warren continues, “All the water in the washing process will go through the cyclone and then directly to the thickener. The AquaCycle then separates the very fine dust and washes out the colour of the water. That’s where the microns are. We settle it, concentrate it and then only pump to ponds that which needs to be pumped. That water then goes into a separate tank. The water goes into the outside of the AquaCycle and from there it gets immediately pumped back into the plant.”

Willem du Plooy, CDE business development manager, sub-Saharan Africa says, “Previously, about 200 000 litres of water was circulated; in this instance, recirculation to the plant is only 10 000 litres. That’s a very small number compared to what was normally used on a site like this.”

Because water is used to wash the product, the sand does end up with a certain amount of moisture. Van Vuuren shares that the moisture content of the washed sand from the bucket wheel was inconsistent, as it did not have a dewatering process and the raw feed wasn’t consistently the same. CDE estimates that with the bucket wheel the final product contained between 23% and 25% of moisture. 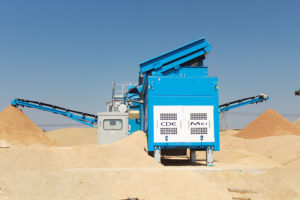 Conveyors deposit river sand and plaster sand to opposite ends of the quarry.

“Water management would ensure that the final products, using the Combo, would be dewatered to an average 12% moisture,” says du Plooy. van Vuuren adds that because clients who collect on site want the sand to be dry to a certain degree, once it comes off from the Combo it is moved less than 500m away from the machine.

Meintjes adds that they’ve added another product thanks to the Combo. “It has opened up a whole new product and market for us. From the same raw feed, we can supply river sand, and now we can produce an additional finer sand as a washed plaster.”

CDE is a Northern Ireland company that provides wet processing solutions to various mines and quarries around the world. Partnering with the UK Department of International Trade and Investment and organisations like Invest Northern Ireland (Invest NI), they have been able to change the mining game. “We are familiar with CDE and we support their global expansion. It’s really noteworthy to see them doing more business in Africa,” says Her Majesty’s Trade Commissioner for Africa at the Department for International Trade, Emma Wade-Smith. She explains that they work with CDE on a strategic level looking at their expansion plans. “So our role is to help speed that through to provide insights, on the ground networks, and the like, to really understand how to expand that business as quickly and efficiently as possible.”

She further mentions that this kind of technology and innovation is critical considering the current state of mining and economics in Africa. “If you want to maintain your business and keep standards increasing, preparing and being ready for that is really important,” she adds.

The quality of the sand has likewise significantly improved. Wade-Smith says that this is a good thing because this will then reflect on the buildings constructed and the sand materials industry. Meintjes shares the sentiment, “We drive the high standard in quality home. With the technology we are increasing the quality of aggregates being sold to the market and if everyone increases quality of output then we’ll set a standard. The more we do that, the less fly-by night miners there will be coming into the industry. This will create a cut line – everyone above the cutline will get the contract and everyone below that will fall away.” Warren states that CDE liaises with the Aggregate and Sand Producers Association of Southern Africa (ASPASA) often to assist potential clients in understanding the processes and procedures of improving their output.

Impressed by the amount of water it uses to create double the product, Wade-Smith asks, “In a water-stressed environment like South Africa, who wouldn’t want to be using this kind of technology to grow their business?” 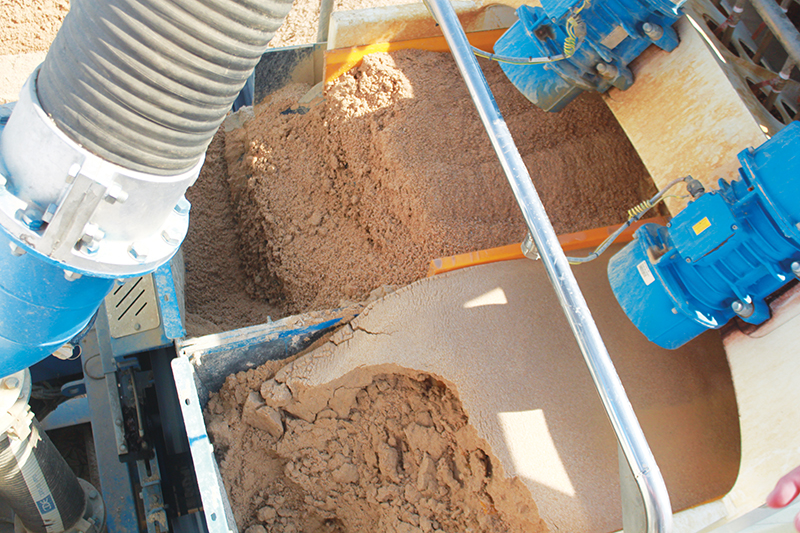 The different kinds of materials that come out of the machine. River sand and plaster sands are produced simultaneously.

Digging their heels in

Old school friends with experience in plant hire, logisitics and quarrying operations, it was only natural to partner on the operation. “The quarry is 60m deep; we can’t go deeper at this point, but we can expand on the surface area. There is the probability of going deeper once we’ve expanded,” says Meintjes.

Operationally, installing and running the machine hasn’t cost Ground Breakers any job losses. Despite doing many jobs at once, the Combo only requires one person to run. As efficient as the machine is, so is the quarry, so there is no material that ends up as waste. “The raw feed is weathered or decomposed granite, which is a product we also market,” Meintjes says. “To get to the right sand, we strip the overburden, then from there on we have about three or four metres of building sand. This also depends on which side of the quarry we are on and from there on downwards, we are talking about 20 – 30 metres of decomposed granite,” adds van Vuuren.

Meintjes and van Vuuren agree that the CDE Combo is compact and highly efficient, adding that customers are happy that the moisture content is very low. “The need for silt dams has been significantly reduced and we have been able to preserve valuable mining areas while reducing operational costs.”

The immmediate recycling of water means the quarry relies less on fresh water. According to the mine operators, similar sites around the area have shut down owing to running out of water. They believe that this technology sets them apart.

According to van Vuuren, anyone who wants to run a mine should aim to not only work hard, but smart as well. “Never compromise on the quality of the end product.” 