Borrowing from the ocean

On a flat expanse of bare, dry earth, a group of hard-hatted figures stand beside a yellow, crawler-tracked machine, discussing the work they are about to begin. Fifty paces to the west, cool Atlantic Ocean waves can be heard breaking against a rampart of boulders and spoil that hides the vast ocean from view. A little further to the east, dense bush rises gently into an opulent green hinterland. The sun is arcing up through a cobalt sky, and a tireless onshore wind lifts a haze of ochre dust. Namdeb’s diamond mine in Oranjemund, Namibia, is an important site for extraction of the precious stones. The mine is adjacent to the estuary of the Orange River. Image credit: Vermeer

It is probably not how many Europeans or North Americans imagine a diamond mine. But Oranjemund, Namibia, is an important site for extraction of the precious stones. The mine is adjacent to the estuary of the Orange River. Having crossed most of southern Africa on its journey to the sea, the Orange River is rich in minerals by the time it meets the ocean. At the river’s mouth, the current slows, and the rocky fragments settle out. The tide then drives the sediment up against the coast, forming banks of sand and gravel. And, in amongst the deposits, there are diamonds.

However, retrieving the gems is far from straightforward for Namdeb, the public-private partnership that operates the mine. Because a lot of the sediments are ordinarily underwater, extraction involves creating seawalls beyond the natural coastline and draining the sandbanks behind them. Millions of tons of gravel then need to be extracted and taken inland for processing. 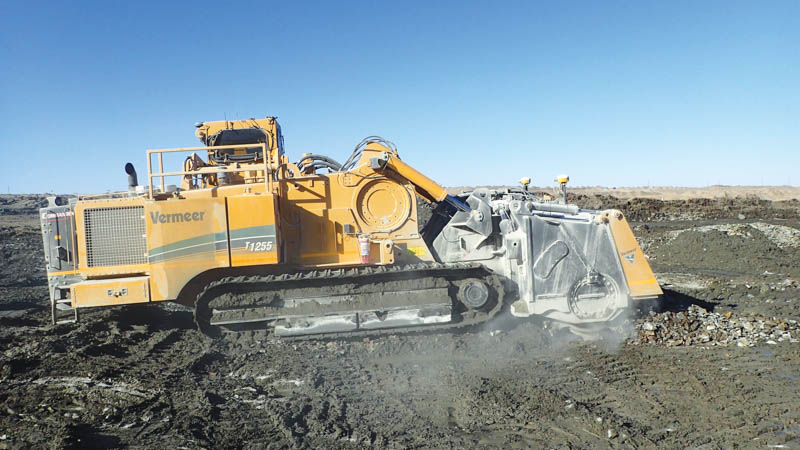 The Vermeer machine cuts layer after layer from the surface, until the point where the bedrock-to-gravel ratio made continuation uneconomical. Image credit: Vermeer 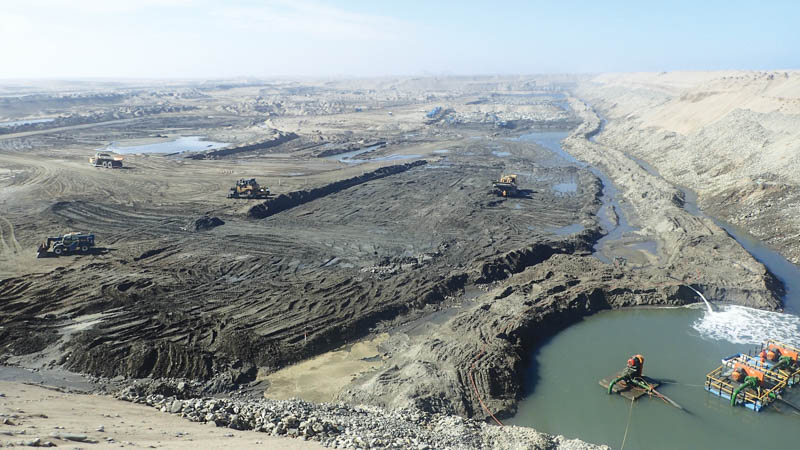 Extraction involves creating seawalls beyond the natural coastline and draining the sandbanks behind them. Millions of tons of gravel then need to be extracted and taken inland for processing. Image credit: Vermeer 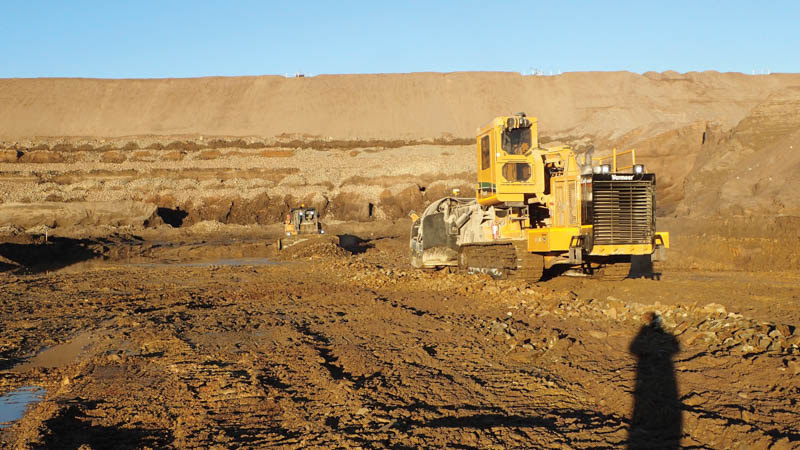 The T1255III with single-side direct drum is ideal for the job. Image credit: Vermeer

Although it sounds simple, gravel extraction is a challenging process. The beach-like surface sediment hides a sculpted maze of bedrock with hollows and gullies, several meters deep, and those hollows and gullies are filled with diamond-bearing deposits which Namdeb naturally wants to retrieve. For years, the procedure was to begin by removing the surface gravels down to the first bedrock outcrops. Teams of workers were then deployed to empty the gullies using vacuum extractors – slow, labour-intensive work.

Looking for a mechanised solution, Namdeb invited tenders. They had four objectives. To improve the safety of the workforce. With the old mining method, there was too much risk of people slipping and falling, breaking arms and legs. Second, the mine wanted to improve surveillance. Thirdly, the oversized material and big lumps of solid rock could be used for seawall construction. Mechanisation was also a way of increasing the clearance rate. The viability of an operation like this depends on efficiency: when you are extracting and processing tons of sediment for every few carats of diamond, you’ve got to work efficiently to make it pay.

Responding to the call, Vermeer proposed the use of a T1255 Commander 3 Terrain Leveler surface excavation machine. A new approach was envisaged, where each newly drained block of ground was first stripped by bulldozers. The Vermeer machine would then be brought onto the flattened site and would proceed to cut layer after layer from the surface, until the point where the bedrock-to-gravel ratio made continuation uneconomical.

“We knew that the T1255III with single-side direct drum drive would be ideal for the job,” recalls Vermeer dealer Frank Beerthuis. “In looks, it’s not dissimilar to a common rotating milling machine. However, its unique crawler-tracked design, combined with the direct-drive technology, makes the T1255III the best fit for the job. Most machines used in surface mining have a lot of high-wear mechanical drive components. Things such as gearboxes, chains, and sprockets. Being direct drive, the T1255III does not have anything like that. As a result, it’s reliable and more than capable of chewing its way through the mix of bedrock and gravelly sediment on the Namibian coastal site.”

Beerthuis highlights a common misconception: “You might think that, for this kind of activity, it’s simply a case of the more power the better. In fact, the key things are the standoff height and the rotary force at the cutting surface. More power implies a bigger, heavier machine, and there are limits to what is practical for most surface mining applications. What you really want is a high rotary force-to-power ratio, coupled with the ability to withstand high impact loads, and that’s what the direct-drive T1255III delivers.”

“We maintain close after-sales contact with our clients, who provide us with a continuous flow of feedback and performance data. So we’ve got numbers on this machine and its predecessors going back to 2001. We were able to prepare a comprehensive tender document for Namdeb, setting out all the options and the pros and cons of each, including estimated life expectancy of wear components, fuel consumption, per-ton productivity data, everything. Not based on predictions or extrapolations, based on hard facts and figures collected in the field over a period of decades.”

Namdeb’s spokesman continues the story: “What we liked about the pitch of Vermeer was that their people were clearly on top of their game. That gave us confidence in the product. The data was compelling too. The rival machines were all chain-driven; Vermeer’s direct-drive leveler had obvious advantages in terms of breaking force, versatility and estimated operating cost. Namdeb also liked the fact that the dedicated wear parts are quick to replace. Such details have major benefits, because having a machine sidelined awaiting parts or the availability of a specialist engineer to fit them can be disruptive and costly.”

Despite the persuasive tender of Vermeer, Namdeb decided it was prudent to start with an equipment rental agreement. Effectively, the mining company took the machine on trial before committing to buy. When the Terrain Leveler SEM was delivered in August 2019, Vermeer sent a team out to Namibia to assist with deployment. The team operated the machine in the early stages, monitored performance, instructed the Namdeb operators and helped to resolve the issues with teeth consumption. Mining at Namdeb’s mine in Oranjemund. Image credit: Vermeer

The approach Vermeer took to resolve issues was one of the things that impressed Namdeb most. “You can’t expect things to go perfectly from the beginning,” observes Beerthuis. “Our company philosophy is very much based around supporting customers in the post-delivery period. It’s important to put yourself in the customer’s shoes, consider issues from their viewpoint and help them identify solutions.”

It did not take long for the T1255III Terrain Leveler SEM to prove its worth. It was obvious from the production data that the surface miner more than lived up to the claims from Vermeer, so Namdeb decided to go ahead with the purchase even before the lease period ended.

A year from its initial deployment, the machine is in continuous use, the linchpin of a highly efficient extraction operation. Diamond mining is expected to continue at Oranjemund for some years to come. Then, once the viable deposits have been extracted, Namdeb will breach the seawall and return the site to the ocean. In another generation, the area will simply be another part of Namibia’s precious wilderness, with no sign of the sophisticated operations enabled by sector-leading engineering from Vermeer.