Even though Namibia is struggling to recover after Covid-19, the country’s mineral wealth is a great national asset backed up by top class infrastructure, writes Leon Louw.

In terms of stability and certainty, Namibia and Botswana are prime examples of how to go about business if you want to attract foreign investment. Although Namibia has only marginally increased its position on the overall Investment Attractiveness Index of the Canadian-based Fraser Institute’s 2020 Report on the Annual Survey of Mining Companies, the country still hosts world class mineral deposits and remains a first-class mining destination.

Namibia’s underperformance on the Investment Attractiveness Index was driven by a drastic decline on the Policy Perception Index (PPI) by 12.92 points. The report cites Namibia as the only African jurisdiction that did not improve on this particular index.

Namibia dropped 33 places globally on its PPI score and fell from first place in 2019 to fifth position in 2020 on the African continent. Although it is a concern given that investors regard other jurisdictions as having comparatively more stable and favourable policy, Namibia is still in the top five when it comes to the ease of doing business.

In comparison to other African countries, Namibia offers good road and rail infrastructure, and both its ports, Walvis Bay and Luderitz, have recently been upgraded. Walvis Bay has in fact become the port of choice for many of Namibia’s neighbouring countries as well and serve as the port of call for almost all of Namibia’s mining operations.

Luderitz Port, in turn, has become the primary export facility for Trevali Resources’ Rosh Pinah lead/zinc project in the south of the country and in addition takes in ore from several producers in the Northern Cape of province of South Africa.

Namibia is best known for its diamond and uranium mines and while the established uranium producers, now mostly in the hands of Chinese producers, have continued their good track record, all eyes are on Australian-listed Bannerman Energy as the company advances its Etango project close to Swakopmund in the Erongo Region on the west coast
of Namibia. 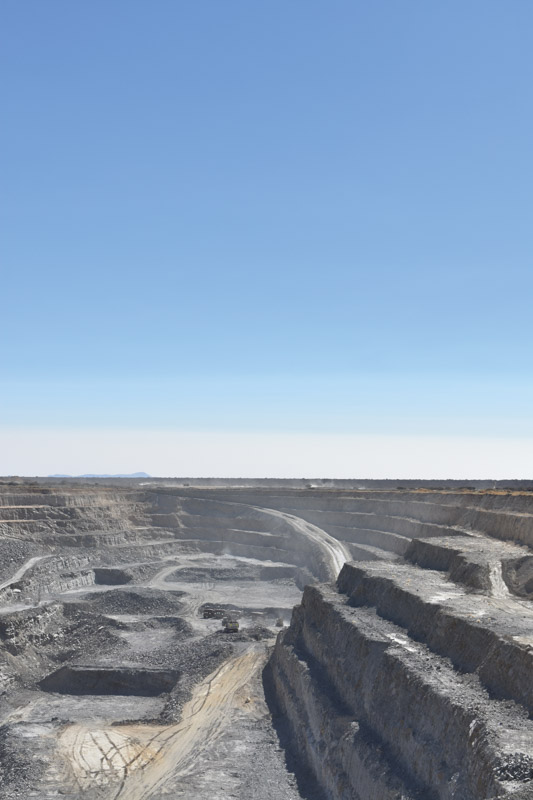 Canadian-listed B2Gold’s Otjikoto mine has been an outstanding performer in the Namibian mining sector. Image credit: Leon Louw

According to Brandon Munro, CEO at Bannerman, the Etango tenements possess a globally large-scale uranium mineral resource. “The project has benefited from extensive exploration and feasibility activity since we listed as a public company on the Australian Securities Exchange (ASX) in 2005,” says Munro.

A 20 Million tonne per annum (Mtpa) development at Etango was the subject of a Definitive Feasibility Study (DFS) completed in 2012 and a DFS Optimisation Study completed in 2015.

“We constructed and operated a Heap Leach Demonstration Plant at Etango, which comprehensively de-risked the acid heap leach process to be utilised on the Etango ore,” he adds.

According to Munro, Namibia is a premier uranium investment jurisdiction, with a 45-year history of uranium production and export, excellent infrastructure, and support for uranium mining from both government and community.

As the world’s fourth largest producer of uranium, Namibia is an ideal development jurisdiction boasting political stability, security, a strong rule of law and an assertive development agenda.

Etango has environmental approvals for the proposed mine, based on a 12-year environmental baseline. In August 2021, Bannerman completed a Pre-Feasibility Study on an 8Mtpa development of Etango (Etango-8 Project). The PFS has demonstrated that this accelerated, streamlined project is strongly amenable to development – both technically and economically.

One of the more exciting projects in Namibia is South African based Afritin’s Uis mine, also in the Erongo region, close to the historic tin mining town of Uis. Afritin is well into production at the deposit which was initially discovered in 1911 and was subsequently developed by Iscor of South Africa. Production started at Uis in the 1950s and ended in 1990 because of depressed tin prices. Afritin started operating at Uis in 2018.

Uis has returned to full scale mining after lockdowns during Covid-19. According to Anthony Viljoen, CEO at Afritin, the lockdown did result in delays in the planned throughput increases, but optimisation work has resumed, and the mine is expected to reach design capacity soon. Meanwhile, Canadian company B2Gold’s Otjikoto mine performed well during the second quarter of 2021, producing 26,891 ounces of gold, well above budget by 7%  (1,786 ounces).

This, according to a statement by the company, was mainly because of higher than budgeted processed grade (5% above budget) as the grade of ore sourced from the medium grade stockpile was slightly higher than anticipated during the second quarter.

“As expected, compared to the second quarter of 2020, gold production was significantly lower by 38% (16,605 ounces), as processed ore was primarily sourced from existing stockpiles while significant waste stripping operations continue at both the Wolfshag and Otjikoto pits,” B2Gold stated.

The initial underground Mineral Reserve estimate for the down-plunge extension of the Wolfshag orebody included 210,000 ounces of gold in 1.2 million tonnes of ore at 5.57 g/t gold. Another gold project that has been attracting attention is TSX-listed Osino Resources’s Twin Hills project close to Karabib. Twin Hills is adjacent to the Navachab gold mine, still going after it changed owners on numerous occasions since being in the hands of mining giant AngloGold Ashanti in the late 80s. AngloGold sold Navachab in 2014.

However, the hills around Karabib holds many secrets, as Namibian born Heye Daun, president and CEO of Osino Resources, and his group of highly competent geologists have discovered.

Osino recently filed its Preliminary Economic Assessment (PEA) for Twin Hills. The PEA was put together with the assistance of Lycopodium Minerals Africa and contemplates a technically simple open-pit mine utilising contract mining and feeding a conventional carbon-inleach (CIL) metallurgical plant processing 3.5 million tonnes of mineralised material per annum. Walvis Bay Port has become the port of choice for a number of mining operations in neighbouring countries. Image credit: Leon Louw

This is good news for Namibia’s third mining project with one or two more in the pipeline. Twin Hills was discovered by Osino in 2019 and is currently in the growth and de-risking phase whilst being fast-tracked to production.

Osino also has a large ground position of approximately 6,700km2 located within Namibia’s prospective Damara sedimentary mineral belt, mostly in proximity to and along strike of Navachab and Otjikoto.

According to Daun, the company is actively advancing a range of other gold prospects and targets along the belt by utilising a portfolio approach geared towards discovery, targeting gold mineralisation that fits the broad orogenic gold model.

“Our core projects are favourably located in central and northern Namibia within easy driving distance from the capital city Windhoek. By virtue of their location, the projects benefit significantly from Namibia’s well-established infrastructure with paved highways, railway, power, and water in close proximity. Namibia is mining-friendly and lauded as one of the continent’s most politically and socially stable jurisdictions. Osino continues to evaluate new ground with a view to expanding our Namibian portfolio,” says Daun.