Despite the challenges presented in 2020 and 2021, TLT-Turbo Africa has continued to redefine ventilation for mining operations across the continent. Their new range of Auxiliary and Booster fans provides substantial electrical cost-savings. This was proven last year at a major global gold and platinum producer, just three months after installing a customised pair of TLT-Turbo Africa’s fans at one of their South African sites.

According to Vusi Madlopha, TLT-Turbo Africa Head of Sales & Business Development, the company was approached by an ultra-deep mining operation located in Gauteng, requiring a recommendation for a suitable fan solution to be installed in a section of their mine.

TLT-Turbo Africa’s solution was purpose-designed to meet the requirements of the mining operation. At the time, the operation was using multiple installations of auxiliary fans to deliver the required volume and pressure (these auxiliary fans were consuming ±630kwe). The mine was also operating three main surface fans, each consuming ±2MW of power.

“The mine’s main objective was to ensure that a sufficient volume of ventilating air was provided to the underground operations while reducing power consumption,” says Madlopha.

“To meet their needs, TLT-Turbo Africa was required to supply two fans, each capable of moving 71 m³/sec of ventilating air at a pressure loss of 3000Pa.” These requirements fall comfortably within the design ranges of TLT-Turbo Africa’s A&B fan offerings.

Based on an assessment of the mine’s needs, the final recommendation made by TLT-Turbo Africa was for two MC1600AP-160KW dual stage fans from the newly launched A&B fan range (specifically 1600mm diameter, dual-stage fans, each fan driven by two 160kW high-efficiency motors).

However, there was another challenge that TLT-Turbo’s team was required to resolve; the selected fans (as per standard, off-the-shelf design) would be too large, to pass freely through the shaft and horizontal infrastructure, in order to reach their installation site.

Madlopha says to overcome this obstacle; TLT-Turbo Africa’s R&D team custom-designed the required fans to be modular, this allowed transport of the fan components through the shafts and access tunnels of the mine, once on site, the fans were easily assembled.
The complete product offering also included broadband silencers, self-closing doors, and other fan ancillaries. For this project, TLT-Turbo Africa also provided Direct On-line (DOL) starter panels, which were locally manufactured.

According to Madlopha, TLT-Turbo Africa offered the mine a solution well suited to the tough underground mining environment. This solution would ensure a reliable supply of ventilation within the section of the mine in which the fans were to be installed.

Underground mining requires teamwork which brings workers in close proximity to each other. Image credit: TLT

Three months after the installation and commissioning of the supplied fans, feedback from the mine echoed Madlopha’s confidence in the TLT-Turbo Africa product. Conditions underground at the shaft have improved noticeably, particularly in the previously warmer upper levels.

Positive comments regarding these improved ventilation conditions have been received from all levels of the workforce. Measurement of the delivered performance of the installed fans, indicated that the fans were performing exactly as had been specified (both in respect to volume of ventilating air moved and in power consumed).

The installation and commissioning of the TLT-Turbo Africa fans described above, has allowed the mine to permanently stop and remove 14 other auxiliary fans (with a total rated power of 630kW). In addition, the mine has also been able to permanently stop one of the main surface fans, resulting in a direct energy saving of +2MW of power, providing an annual electrical cost-saving of ±R14m. The capital pay-back period on this project has been less than 3 months. With the lifespan of this project exceeding 10 years, the implied electrical cost savings of this solution are massive.

According to Madlopha, the success of their ventilation equipment at this mine can be attributed to the innovative design of their A&B fan range, and to the ability of TLT-Turbo’s experts to customise these fans even further to meet client and site-specific requirements. “The system supplied was customised and optimised for that particular operation. The design point, layout and robust structure provided an overall fan system which is not only efficient, but also reliable.”

The performance and energy efficiency of TLT-Turbo’s A&B range is capturing attention on a global scale. TLT-Turbo Africa has provided similar solutions to various companies in sub-Saharan Africa, and also recently, the US. “It is a well-known fact that if equipment performs well under South African hard rock mining conditions, then it is up to the test in other mining markets around the world. This has led us to a strategy for internationalisation of this product range,” Madlopha enthuses.

Madlopha states that the key to the success of any mining ventilation project such as this installation, is their unwavering commitment to redefining ventilation. The A&B fan range was designed based on client input with the objective of meeting ventilation requirements and reducing operational costs. The A&B fan range solutions are designed to replace the traditional, large primary ventilation fans with a simple, ‘plug and play’, modular design, using the same fans which are also designed to be used underground. This concept allows a mine to keep standardised spares, therefore improving reliability and availability of the fans.

Meanwhile TLT-Turbo Africa have announced the extension of their current Auxiliary and Booster Fan range to include variants that are able to provide flexibility to clients on all underground ventilation performance requirements.

Following the launch and subsequent market success of the TLT-Turbo Auxiliary and Booster Fan (A&B) range for the mining industry launched in 2019, TLT-Turbo Africa noticed a trend emerging of mining companies focusing on energy efficient solutions for ventilation. Based on enquiries received from numerous existing and potential clients, TLT-Turbo identified a gap in the mining ventilation market as demand increased for fans in the size range between 1 600mm and 2 000mm diameter.

“With the mining sector starting to move away from large scale, end of life surface fan installations to smaller, more scalable and movable ventilation installations, it became clear to us that this niche will become more and more relevant in the future.

TLT-Turbo Africa decided to bridge this gap in our offering by extending the current standardised auxiliary and booster (A&B) fan range to include 1 800mm and 2 000mm variants,” says Madlopha.

The same design methodology and aerodynamic concepts on which the A&B fan range was based were taken on board to develop these larger fan products.

Standardisation was also one of the main criteria for the development of the new fans to ensure a globally cost-effective supply chain of product components. This was achieved by using the same blade, impeller, and stator design from the A&B fan range. “To enhance product robustness and performance, we included features of the TLT-Turbo Modular Mine Fan range which includes fans ranging in size from 2 000mm to 3 150mm,” says Madlopha.

Stephan Viviers, engineering specialist at TLT-Turbo Africa, goes on to explain what makes these new fans exceptional from design and product development aspects. “The standard design features include a horizontally split fan casing to allow for larger foot mount motors to be installed and to make international transport of components possible within normal sized marine containers. All fans in the range are designed to operate in 50Hz and 60Hz applications with a 2-pole motor at 3 000 and 3 600 RPM and with a 4-pole motor at 1 500 and 1 800 RPM.”

The Booster fan range is supplied standard with in-situ blade pitch angle adjustment brackets. The full range of fans can also be supplied with optional temperature and vibration sensors, as well as an Anti-Stall Unit (ASU). The fans are fully Variable Speed Drive (VSD) compliant, and thus can be easily integrated to any Ventilation on Demand (VOD) system. A large range of duty points can be achieved at high efficiency by varying the blade pitch angles as well as the solidity of the impeller. Fans can also be installed in series up to three stages to achieve higher pressure requirements allowing the client more flexibility.

TLT-Turbo Africa recently completed the build and supply of the first MC2000 for the Australian market. Madlopha describes this fan as a “top of the range South African manufactured product in terms of size and performance”. The fan’s highest duty point was designed to deliver a volume flow of 90.0 [m3/s] and 4,000.0 [Pa] of Total Pressure at an air density of 1.2 [kg/m3] and VSD setting of 110%. This particular unit was intended for a force draft application and included an aerodynamic conical inlet as well as an outlet diffuser to allow for further static pressure recovery.

Prior to delivery of the final product, TLT-Turbo Africa performed an on-site performance test to ensure that the performance parameters predicted were achieved. The test was broadcasted via live video feed to interested parties at both the TLT-Turbo headquarters in Germany and TLT-Turbo Australia with invited clients.

TLT-Turbo Africa conducted the fan testing according to requirements from the BS EN ISO 5802:2008 Standard for Performance Testing of Industrial Fans In-Situ. Environmental conditions as well as several flow, pressure and power measurements were recorded at two different speeds and at various simulated system resistance levels. Experimental results corresponded well (with a slightly higher performance) to the Computational Fluid Dynamics (CFD) simulations. The predicted and targeted efficiencies were also achieved. 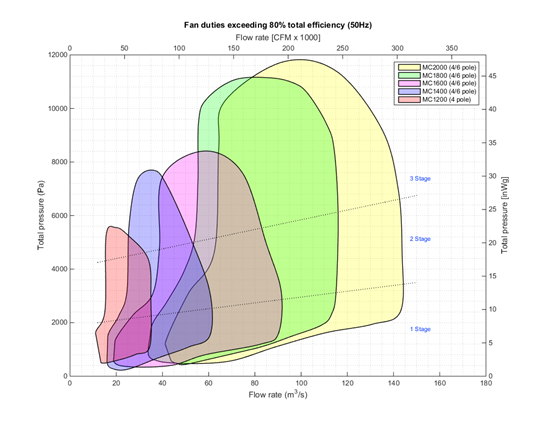 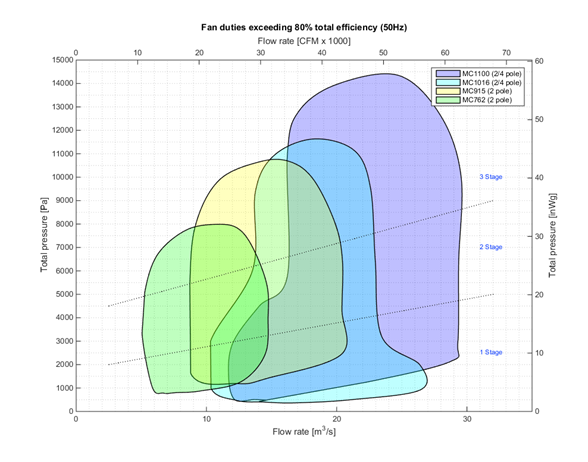 “These tests are a confirmation of the efficacy of the use of tools such as CFD to fast track our designs and ensure that we as TLT-Turbo Africa are able to deliver standard as well as niche solutions to our customers within acceptable timelines,” Viviers comments.

“Having this size product as a standard offering in the mining industry is of huge global significance based on the direction that mining developments are taking with dynamic scalability at the heart of ventilation. Mining contractors are also interested in a product that can allow them to use more smaller, and modular fans for underground booster applications. This enhancement of the TLT-Turbo product range will shorten lead times and capital costs to our customers’ growing applications,” concludes Viviers.